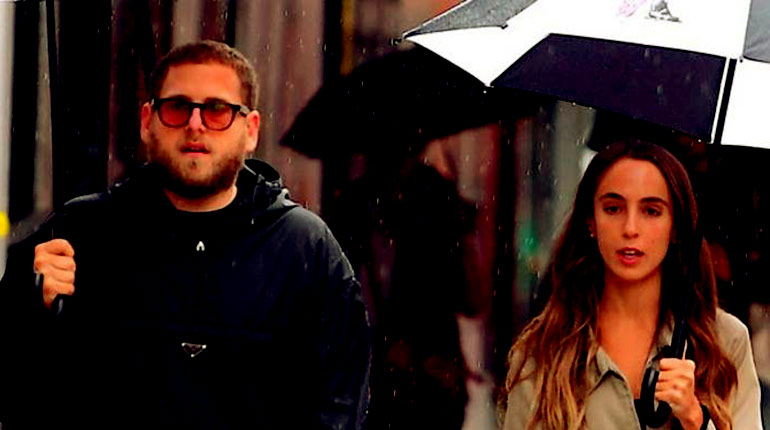 Congratulations are in order for actor Jonah Hill who got engaged recently to his girlfriend, Gianna Santos. Since the news is still fresh, the pair have tried keeping everything under wraps with tiny leaks surfacing. Now we don’t like feeding you with unconfirmed reports, but we are going to go out on a limb that she said Yes! Here’s the tea on the engagement as well as their intended marriage date

Page Six was the first to break the news on Jonah Hill’s engagement to Gianna Santos. In the exclusive report, he proposed earlier in the week and she accepted his proposal. Their close friends were dying to speak out about the engagement, and a source confirmed the speculations on Tuesday, September 3rd.

However, the paparazzi had nothing to show for. Recent pictures of the couple show them on Monday morning walking in the rain from Crosby Street Hotel in Manhattan heading for breakfast at The Smile. She had her hand tucked in her jacket; thus no visible ring spotted.

The engagement came as a win for Jonah Hill who had battled weight loss almost the whole of his life. The 21 Jump Street actor had always talked about how he tried fitting in with the rest of the cool kids. As a result, he underwent a strict weight loss regime before realising that accepting who he was was instrumental to his happiness.

No doubt saying Yes on Gianna’s part to the proposal is proof of her acceptance. However, how well do we know her?

Who is Gianna Santos?

Gianna Santos is a 30-year-old content manager at Violet Grey, aka The Industry’s Beauty Edit. She was born in 1989 in Manhattan’s Tribeca, where her parents raised her alongside her younger sister, Olivia.

Though Gianna Santos’ privatised her Instagram, we dug up info on her sister who studies at the University of Maryland as a Kappa Delta. On the other hand, Santos completed her tertiary education at Fordham University in 2011 majoring in Communications and Sociology.

Initially, she worked as a head stylist and E-commerce stylist at KITH, New York City and Jackthreads. Gianna also directed the Vampire Weekend Sunflower music video featuring Ezra Koenig and is also an avid photographer. You can find some of her shots on her self-titled blog

There is currently no information regarding the wedding date. In fact, we don’t even have news on the couple’s engagement party. It’s going to take a lot to plan for the wedding which could possibly interfere with the couple’s busy careers.

Luckily, our boy Jonah Hill already has a plan in motion. An informant reported that the Superbad actor recently bought a mansion worth $6.77 million in Santa Monica, California. For those who aren’t following, the four-bedroomed home will serve as his future marital home with his wife-to-be Gianna Santos. We wish all the best in their life ahead together.