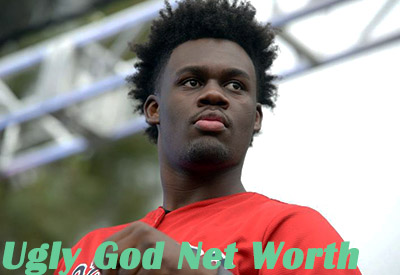 Royce Cornell Davison popularly known as Ugly God is a renowned celebrity who engages in songwriting, rapping and record production – which has made him an internet sensation. He was born on September 19, 1996, in Indiana, USA. One of his landmark songs includes Water (2016) which did very well and appeared among the top 100 songs on the Hot 100 Billboard. In addition, it was in position 80 on the chart back in 2017. He also has another nickname Pussy Bacon. Read this to know Rapper Ugly God’s Net Worth.

Ugly sings under different genres like cloud rap, trap, SoundCloud rap, Hip hop, and comedy rap. All his endeavors have contributed a lot to his current wealth. At his younger age, his ambition was to become a computer engineer, and he had even enrolled at the University of Southern Mississippi. However, he later gave up and dropped out to pursue his music career.

Who is Ugly God? Work highlight.

Ugly used the name Pussy Bacon from his seventh to tenth grade but later changed it because of his parents and as well as social reasons. He said that he is ugly; hence, he created his name second nickname Ugly God. “I Beat My Meat” was the debut song that he released on July 27, 2015, through his SoundCloud account. Since then, it went viral, and up to now, it has garnered a whopping 33 million views. Previously, he had uploaded two other songs but later pulled them down after his high school basketball coach scared him by saying that the songs would prevent him from getting scholarships. The third time he felt that he would not continue sitting on his talent and career, and he uploaded the song at all costs – regardless of the risks it posed him. Fortunately, the song has done reasonably well and increased his net worth.

Water did tremendously well because it reached a point and held position 47 on the On-Demand Streaming Songs chart as of February 11, 2017. Moreover, it was in number 34 on the R&B and Hip Hop songs chart. Afterward, he dropped another track dubbed Fuck Ugly God, which was centered on him and the things that have happened in his life. It also did reasonably well and garnered a whopping 13 million views on SoundCloud. On August 4, 2017, Ugly released a mixtape titled The Booty Tape. It was in number 27 on the Billboard 200 chart.

To top it all, the album did exemplary well, and it got to position two on the New Zealand Heatseekers Albums. Better still, it was in number 15 on US Independent Albums Billboard, not to mention number 18 on the US Billboard of Top R&B/Hip Hop Albums. He has collaborated with Rankin Hasheem Allen.

Ugly God has not been disappointed by his music career. Amazingly, Water – one of his singles outdid many songs and managed to get an immaculate 87 million views. Not many songs and videos manage to get such a large number of views. His net worth is $400,000, but that is just an estimate. It could be much more than that.

He reserves some details about his life and hence, his car and house details cannot be established. However, he could have bought or not bought them because he is also young. His net worth is good enough to give him a decent life.