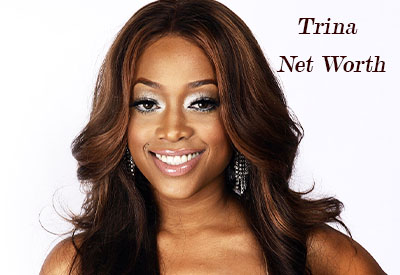 Trina’s full name is Katrina Laverne Taylor. She is an American rapper, model and television personality who has been named “The most consistent female rapper of all time” by XXL Magazine. She has marked her presence in the world of rappers through her various works. Trina started a charity called “Diamond Doll” to help the underprivileged children.

Read further to know about Trina’s net worth, family status, age and much more.

Trina’s net worth as in 2021, with some five successful albums so far, is approximate $6 Million. Before beginning her musical career as a professional rapper, Trina worked as a real estate agent. In 1998, she was launched by Tricky Daddy which bagged her a lot of attention along with the title of “The Queen of the South.”

In 2000, she released her first album named “Da Baddest Bitch.” Following this, in 2002, the Gold album named “Diamond Princess” bagged her a lot of attention from producers all around the world. She became a household name selling more than 700.000 copies in the United States of America.

She has also collaborated with several stars such as Rick Ross, Missy Elliot, Ludacris, Lil Wayne and Kelly Rowland for some musical ventures.

Trina has Dominican and Bahamian ancestry. Trina’s father is from the Dominican Republic, and her mother belongs to the Bahama Islands. However, their names are nowhere mentioned. They got divorced when Trina was a young girl. American Rapper Trina also has a brother whose name is Wilbrent Bain Junior.

Trina has had a total of six relationships in her past life, namely-

Trina is a 46-year-old American National, born in Miami, Florida in the United States of America on 3rd December 1974.