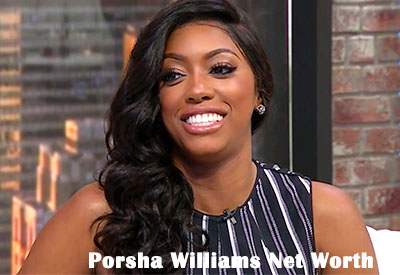 In this review, we will get to learn more about the reality star, Porsha Williams. She is a woman who rose to fame after her appearance on the Real Housewives of Atlanta. Ever since she has become a mainstay on our television screen. The stunning Atlanta born native is also an actress and model. Know Porsha Williams net worth right here.

Who is Porsha Williams?

Porsha Williams is an American model, actress, television personality and reality TV star. The woman shot to fame after her starring role in the fifth season of the Real Housewives of Atlanta. Her most recent stint on television was on the show New Celebrity Apprentice, where she finished in the top ten. The reality star also featured on Dish Nation.

Porsha started as a model, initially making paid appearances on a few music videos. Since then, she has done several things of note, such as becoming the cover girl of Atlanta Dymes, a popular calendar. Around her mid-twenties, she took a page out of her parent’s books and started her own business.

This came in the form of a Day Care Centre. The star’s earliest days on reality television came when her high profile wedding to NFL star Kordell Stewart was broadcasted on the TV series, Platinum Weddings.

The former model’s big break came when she was brought on to co-star on the fifth season of The Real Housewives of Atlanta. Since then, she has become a mainstay on the show and was even cast on the re-union spinoff. Besides television, she also went to dip her toes in a few other ventures: she started her line of hair care products and even ventured into the world of music. The artist has released tracks such as Flatline.

It is reported that reality television stars earn an average of $ 20,000 per episode, depending on the networks they work for. As such, Porsha Williams has an estimated net worth of $1 Million.

In regards to assets, the former model owns a few businesses. These include a day care center and a successful line of hair products which provide an alternative source of revenue, boosting her overall wealth.

Porsha Williams is an Atlanta native. She was born in Georgia, on the 22nd of June 1981. This makes the former model 37 years old right now. Porsha’s parents are Hosea Williams II and Diana Williams. Both of them are firmly invested in the world of business, and this seemed to have rubbed off on their daughter.

The star grew up with two siblings: Lauren and Hosea Williams. For her educational background, she went to Southwest Dekalb High School, before attending the Intercontinental University in Illinois where she pursued a degree in Business Information Technology.

Porsha was previously married to NFL star Kordell Stewart. But the marriage would only last for three years. Presently, she is engaged to Dennis McKinley, and the happy couple is even expecting their first child this year. The television personality has tried several things over the years to find her niche: acting, singing, and business, to name a few.