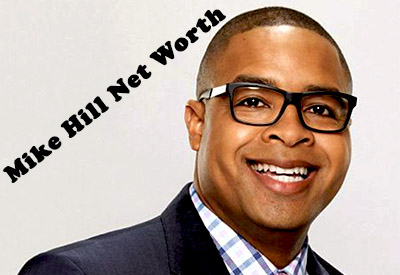 The ESPN channel is the biggest sports network on television and has worked many sports journalists such as anchors, reporters, and more. The network has numerous highly paid sportscaster and personalities on staff. Among them, Mike Hill is one who has served as a host on ESPN for almost a decade.

Mike’s fans are eager to know about his salary and a total asset. So, what the figure of Cynthia Bailey’s husband Mike Hill’s net worth, as of now? Let’s find out.

Who is Mike Hill?

American-born Mike Hill is a professional sportscaster for Fox Sports 1. Full name; James Michael Hill, aka Mike, was born on August 19, 1970, that makes his age 49. Mike spent his childhood in both the Bronx and Bessemer, Alabama. He graduated from the United States Air Force Academy.

Mike began his career as a sportscaster in the year 1995. Initially, he worked as a sports director at WHAG-TV in Hagerstown, Maryland. Following the year, he got an anchor job at KSEE-TV in Fresno, Califonia. Eventually, he moved to WKRN-TV in Nashville, where he covered high school football from 1997 to 2000 for which won two Emmy awards.

Moreover, he hired as a host by Fox Sports Net in New York City and served until 2002. Before joining the ESPN, Hill served for KXAS-TV, in Dallas, Texas, as a sports anchor.

While working on ESPN, he hosted along with Mark Schlereth, a program called ‘Hill and Schlereth’ on ESPN Radio. Moreover, his other shows include Sports Center, ESPN First Take, Highlight Express, and much more.

Further, Hill left ESPN for Fox Sports 1, where he guest-hosted ‘Fox Sports Live’ and ‘Fox Football Daily’ and also contributes to the coverage of the network of college basketball. In June 2018, he hosted a second season of a game show ‘BIG3’ on FS1.

Apart from that, Hill is the CEO of Thrill of Entertainment. The company offers multimedia content for television, internet radio, and print projects. Also, he gave his voice for the audiobook ‘Power, Moner and Sex’, an autobiography by Deion Sanders.

The father of two children is engaged to be married to his girlfriend Cynthia Bailey, who is a former model and the cast member of the Real Housewives of Atlanta. He has a stepdaughter named, Noelle Robinson, 19, born from his fiancee previous relationship. Hill’stow daughters; Kyala, 17, and Ashless, 19, both were witnessed to their parent’s engagement.

A creative mind with a charming personality, Hill covered many sports new in his career. Mike Hill has been working on Fox Sports 1 as a sportscaster since 2013. Before that, he served fro ESPN from 2004 to 2013.

Mike, a versatile broadcaster, has more than 20 years of experience. During these years, he accumulated an impressive salary that helps to increase his net worth in the upcoming days. So, how much does he earn?

As of 2019, Mike Hill has a whopping net worth of $5 million. But his salary is not mentioned in the media yet. However, his fiancee had garnered good money from her modeling career as well as from the reality show.

The FS1 sportscaster is enjoying a lavish life and salary he earned. According to Bravo, he and Cynthia live in a beautiful home in Los Angeles that worth not less than a million. Further, there is no detail of his car collection.