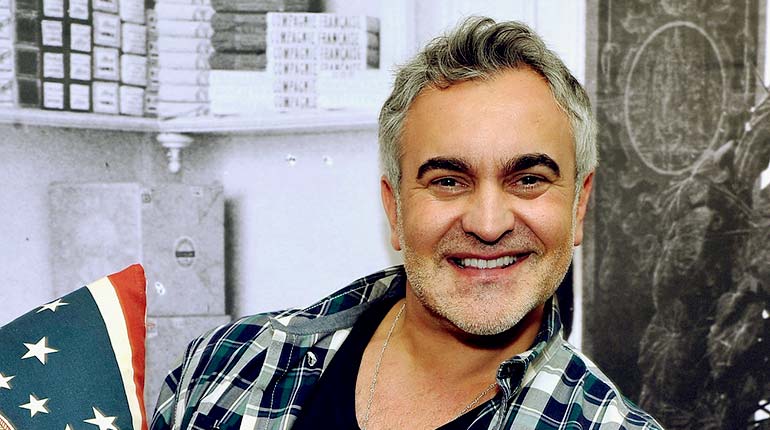 Martyn Lawrence Bullard is a multi-award-winning English interior designer, television personality, and author. He is famous for his wide-view of styles and eclectic.

The well-known designer is also a television personality and has appeared in the significant Bravo series like Million Dollar Decorators. Similarly, he hosted Channel 4’s Hollywood Me in the UK.

Till the date, Martyn has worked for over 4000 publications worldwide and earned international acclaim. He covered on the Architectural Digest includes the lavish mansion of reality television series like Khloe Kardashian and Kim Kardashian West. His cover on Kim and Khloe became the publications’ best selling issue of all time.

As an author, Martyn has published two books; Live, Love, & Decorate in 2011 and Design & Decoration in 2016. Both books are about his world of beautiful and architectural interiors with detailed information.

Martyn (Martin) Lawrence Bullard was born on 30th March 1967 and is 52 years old, as of 2019. He was born in Lewisham, London, England, and currently resides in Los Angeles, California, the United States of America.

Martyn is of British nationality and belongs to the English ethnicity. He began his designing career during his teen days. Martyn Lawrence collected a considerable amount of money from buying and selling decorator items, which he called “oddments.”

Martyn summed up his earnings to attend the Lee Strasberg Actors Studio located in London’s Covent Garden. During his school days, he continued to buy and sell antiques.

Martyn did not disclose much information about his parents and family life, but his father is an actor turned businessman who motivated him a lot and helped/ supported him in his early days.

As mentioned above, the 52 years old author was keen on designing and eventually began his profession in design in his teen days. His father rented him a stall at the Greenwich Antiques Market located in South London.

Martyn was thirteen years old when he started buying and selling “oddments.” By 16, he developed a clientele of dealers and collectors, which included the head buyer for Ralph Lauren Antiques. The head buyer shipped the pieces to the United States of America to decorate the windows of Lauren’s Madison Avenue and boutiques of Rodeo Drive.

Martyn, at the age of 17, thought of pursuing a career as an actor. With the earnings he made through the design, he moved to Los Angeles in the year 1994.

Right after moving to Los Angeles, Martyn got offers for numerous roles, including in I Woke Up Early The Day I Died. One of his producers visited his home and was impressed with its decors; so, he asked him to decorate his office.

Martyn Lawrence Bullard was then eventually asked to decorate the house and office of Liz Heller and soon after John Bard Manulis’ wedding ceremony. As a guest to the wedding ceremony, he sat next to Cheryl Tiegs, who became his first celebrity client.

For his marvelous and skillful designs, he won the “Oscar of the Interior Design World” and “the Andrew Martin International Designer of The Year Award” in the year 2010.

Martyn Lawrence Bullard’s Net Worth In 2019.

As Martyn started making money just at the age of 13 and being the world-class designer, he definitely has a high figure of net worth.

Martyn Lawrence Bullard’s net worth in 2019 is around $1 million. But his appearances and busy schedules make everyone compelled to think that his worth is higher than the reported.

Martyn collects a hefty amount of cash from his professional interior designing career. Likewise, television career, books, endorsements, entrepreneurship, fabric collection, and appearances in the events and shows are also his other major sources of income.

His book Live, Love, and Decorate is worth £35.00 in hardcover, as per Amazon.

Who is Martyn Lawrence Bullard’s Wife?

Martyn not only has a prosperous professional career but also a contented love life. As his sexuality is concerned, he is openly gay. He is currently in a romantic relationship with gay partner Michael Green, who is a television and film producer.

The couple started dating since 2007 and now enjoys a live-in relationship. Back in April 2017, the gay couple enjoyed their tenth-anniversary posting pictures on their respective social media accounts.

The secretive couple did not disclose how and when they met for the first time and how their bond blossomed to romance. Likewise, they have not shared any views of taking their relationship to the next level.

Martyn and Michael have a pet dog named Daisy, who they consider as their baby daughter.