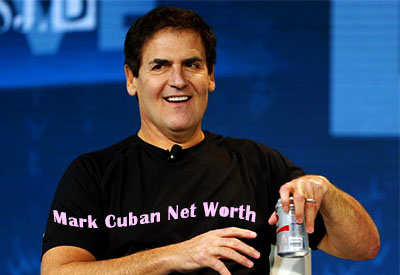 Mark Cuban is one of America’s wealthiest businessmen whose journey to greatness hasn’t been easy. Thanks to hard work and determination, he can now be mentioned among celebrity names worldwide. Cuban has gone through a tough journey, including living in a dumpy apartment and staying up all night while eating chicken wings to teach himself coding. Read this to know Mark Cuban Net Worth in 2019.

All the sacrifices had since proven worthwhile as he now boasts of various business deals including being the owner of NBA’s Dallas Mavericks and the Chairman of AXS TV. Cuban is the co-founder of 2929 Entertainment. The organization owns production companies which have produced films like “Good Night and Good Luck” and “Akeelah and the Bee.” He is also a familiar face in ABC’s “Shark Tank.” This is a show that gives entrepreneurs a chance to pitch their businesses to a panel of celebrity investors.

He made his fortune years before becoming a TV host or a celebrity. He’s starting to a billionaire journey began back in the 1980s where he sold software for Your Business Software Company.

He then started his company in 1982 called MicroSolutions and sold it for $6 million eight years later. Mark Cuban made $2 million from the deal. He later started Audionet, which was an Internet Radio Company.

The company became radio Broadcast.com and broadcasted sports, political conventions among other events. Yahoo acquired Broadcast.com in 1999 for $5.7 billion, and Cuban sold his shared netting $1 billion.

In 2000, Cuban bought the Dallas Mavericks for a whopping $285 million. Today, the Mavericks has risen to higher levels and is $2 billion more than Cuban’s initial investment. He spent $110,000 for the Mavericks bar tab when they won the NBA championship in 2011.

Mark Cuban’s net worth is currently estimated at 4.1 billion.

Cuban featured in a reality TV show called “The Benefactor” where contestants were to compete to win $1 million of his money. The show was, however, was closed after six episodes. He’s currently on another big TV show, “Shark Tank,” which is now going to the 10th season.

Thanks to the show, Cuban has made up to 100 deals and invested his millions in small businesses and startups. In 2015, he offered the biggest deal on the show where he proposed to buy Coffee Meets Bagel, a dating app company for $30 million. The owners of the company rejected that deal.

According to him, the best purchase he ever made is the unlimited first-class American Airline tickets where he spent $250,000. The airline offered the promotion from 1981 to 1994, and Cuban plus 25 other ticket-holders still enjoy free airfare.

Aside from his business deals and lavish spending, Cuban is also a charity giver. He has spent part of his fortune in numerous charities including Cedar’s Sinai Medical Center, Autism Speaks, the Elton John AIDS Foundation, and Christopher and Dana Reeve Foundation.

He also lent his private plane to Puerto Rico native J.J. Barea and Mavericks point guard to supply water, food, and other supplies when Hurricane Maria hit Puerto Rico in 2017.

When the NBA investigated the report by Sports that revealed evidence of Mavericks being a Toxic and discriminatory workplace for women, Cuban responded by pledging $10 million for domestic violence awareness and other women causes.

Cuban bought Gulfstream V business jet for $40 million, which, according to him, was the smartest purchase ever made. This purchase still holds the world record of the biggest internet purchase. On top of the expensive and classy private jet, he also parted ways with up to $17.6 million to buy a 24,000-square-foot mansion which is located in Dallas.

The property features 10 bedrooms, 16 bathrooms, separate guest house at the back, swimming pool, spa, sauna, five wet bars, and a tennis court. Cuban disclosed that he didn’t have a car worth more than $200 at the age of 25.

This is because he was investing most of his money for the success of his businesses. Now he can own any type of car he wishes to have; evident by his purchase of an expensive private jet.