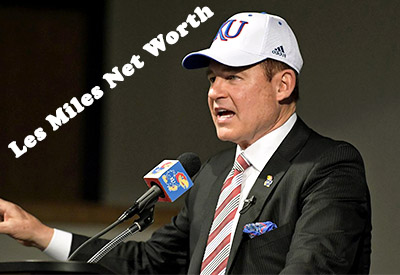 An American football coach Les Miles has won two SEC Championships and a BCS National Championship at one of college football’s elite programs. He was fired from the LSU after an 18-13 loss to Auburn in the 2016 season. Les’ nicknamed the Mad Hatter for his bright white cap on gamedays and also known as a gusty play-caller in the late game. This article is about Les Miles’ Net Worth 2020.

Who is Les Miles?

Les Miles is an enthusiast football coach. Les was born as Leslie Edwin Miles on November 10, 1953, to parent Bubba and Martha Miles in Ohio. He completed his schooling from Elyria High School in his hometown at Elyria in 1972. After that, Les went on to the University of Michigan, where he was a two-year letterman.

At first, he landed a job as a graduate assistant at Michigan University from 1980 to 1981. Later, he served as an offensive coach at Colorado for four years before returning to Michigan to the same position.

In 2001, Les Miles was appointed as a head coach at Oklahoma State, where he served for four years. Then he moved to the Louisiana State University and was named the 32nd head football coach od LSU on January 2, 2005.

In the first season, he won the 2005 SEC Western Division with a 10-1. Miles gained national attention in 2007 due to many unconventional play calls during the nationally televised games.

After working more than a decade for Louisiana State University, he was hired by Kansas as head coach on November 18, 2018.

Les Miles has been working as a football coach since 1995 and has served for many Institutions. College football coaches make a tremendous sum of salary from their work.

Moreover, he makes an annual salary of $4 million from his coaching career. While Nick Saban, known as the best coach, all-time earns $11 million a year. The estimated net worth of Les Miles is $20 million, according to Celebrity Net Worth.

Since 2018, Les served as head coach for Kansas and signed a five-year contract worth $13.8 million.

Per Kansas, Les Miles is getting a 5-year contract starting at $2.775 million a year.

FWIW, Les Miles' five-year, $13.875 million agreement (with $1.275 million in potential retention bonuses) is a much lower number than I would've anticipated to get a national title-winning head coach to #kufball. Remember: Miles just gave up $5 million to do nothing 'til 2023.

Further, in 2016, Miles received a remuneration of more than $4 million alongside a bonus amount up to $100,000 in his ensure at LSU. As of now, his current income comes as the head football coach at Kansas.

The former LSU head coach is living a luxurious lifestyle. Les Miles is not residing in the Baton Rouge mansion anymore. The legendary sports have sold his fabulous home in the Bacofe Lakes community for $1.45 million. It is reported that, at first, they asked for $1.8 million for the house. Miles bought a house back in 2005 for $1.1 million.

The 5,500-square-foot mansion features six-bedroom and six and a half bathrooms with a spacious outdoor that features a screened porch with a gas grill. Furthermore, we couldn’t find the details of his car collections. However, we assure you that the former LSU football coach drives the latest model car across the USA.