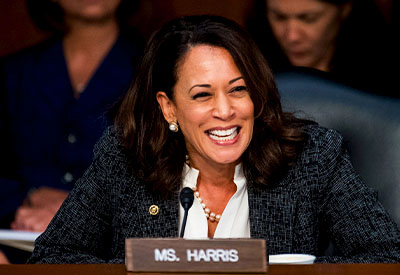 Kamala Harris is a former District Attorney who is presently serving as a junior US Senator representing California. The woman is renowned for her political career, particularly her stance on women’s rights, immigrant policies and other causes. Her outspoken nature has seen her likened to former president Barrack Obama. It has even been reported that the former lawyer is eyeing a 2020 presidential run. Know Kamala Harris’ net worth in this article.

Who is Kamala Harris? Her Career Info.

Kamala Harris is a 54-year-old San Francisco native. She is a former American District Attorney who only burst on to the scene after becoming a junior United States Senator from California. The former lawyer started her career in her hometown, at the District Attorney’s office. Her rise would be gradual, and by 2004, she was serving as the District Attorney. This came after she prevailed over the two-time incumbent, Terence Hallinan.

This is a position she would hold for 7 years, before progressing to become the first ever African American and Asian elected into the office of the Attorney General of California.

She would hold the position for five years, before making the jump to the U.S Senate. Some of the former district attorney’s political achievements include extracting roughly around $ 25 billion from Wall Street during the financial crisis in order to reimburse homeowners. While working as the Attorney General of California, she focused on the prosecution of gangs, drugs and human traffickers.  The former lawyer, at one point also won a $ 1.1 billion settlement against an only for-profit college. Lastly, Kamala is unabashedly known as the voice of the anti-Trump movement. She is not exactly shy about airing her views on policies that she views as detrimental. This is no truer than her views on immigration policies and health care.

It is reported that the former lawyer earned $157,352 in 2018 from her time in Senate. Kamala also reported a profit of $320,000. These were book royalties from her published work, The Truths We Hold. As such, Kamala Harris has an estimated net worth of $ 2 million.

Kamala Devi Harris is from Oakland, California. She was born on October 20th, 1964, which makes her 54 years old at the moment. She is the daughter of Dr. Shyamala Gopalan and Donald Harris. Her father is a Jamaican native whereas her mother is Indian (Tamil). The former District Attorney grew up alongside a sister named Maya, in the East Bay of California. Both girls were brought up under the guidelines of the Baptist Church.

For her educational background, Kamala attended Westmount High School. She would then further her education at Howard University, where she would attain a degree in economics and political science. The former lawyer is also an alumni of the University of California and Hastings College of Law. Her rise to the top has been steady and gradual. She started off working at the district attorney’s office, before making her way to the office of the Attorney General, and finally, the US Senate.

Kamil Harris is also a married woman. Her husband’s name is Douglas Emhoff, and she is the stepmother of two of his children.