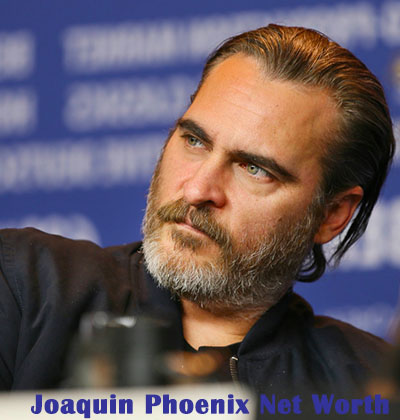 Joaquin Phoenix is a humanitarian, television personality, and one of the very best actors in the world. His impressive career has seen the actor earn several accolades which include a Golden Globe, multiple Academy Award nominations, and even a Grammy. Read this to know Joaquin Phoenix’s net worth in 2019.

Joaquin’s impressive body of work includes films such as Her, You were never really here, the Master, Gladiator, and most recently, the highly anticipated Joker.

Throughout the course of his career, he has worked with other accomplished actors like Russell Crowe, Claire Danes, Robert DeNiro, and Nicole Kidman. Get to know what Joaquin Phoenix’s net worth at the moment.

Who is Joaquin Phoenix?

Joaquin Phoenix is a 45-year-old American actor who has had a critically acclaimed career. Presently, he is one of the most bankable figures in the industry. His parents are Arlyn and John Phoenix. Most people will be surprised to learn that the American actor was actually born in San Juan, Puerto Rico, back on the 28th of October in 1974. Even more shockingly, Joaquin was born into a religious cult known as the Children of God.

After breaking away from the religious zealots, Joaquin set about pursuing a career as an actor. His first big break came with the film, Parenthood. After he tragically lost his brother, River Phoenix, the actor took a short break from acting. He returned with a role alongside Nicole Kidman in 1995’s To Die For. Three years later, he was praised for his role in Return to Paradise, before absolutely stealing the show two years later on the Gladiator.

Joaquin Phoenix would gradually go on to establish himself as one of the best working actors in the business. This came with other films like Walk The Line, The Yards, Reservation Road, and Her. Besides acting, the star also ventured into philanthropy. He helps to manage an organization known as the Lunch Box Fund, which helps feed impoverished kids. The actor is also an advocate for animal rights.

Joaquin Phoenix is a critically lauded and award-winning actor. As such, he has appeared in several films throughout the course of his long storied career. For his award-winning appearance on the film Walk the Line, Joaquin reportedly earned $3.5 million. He also banked $5 million for his role in the thriller movie, the Village.

As such, Joaquin Phoenix’s net worth presently stands at $30 million. Because of the fact that his career shows no sign of slowing down, we expect this figure to keep rising.