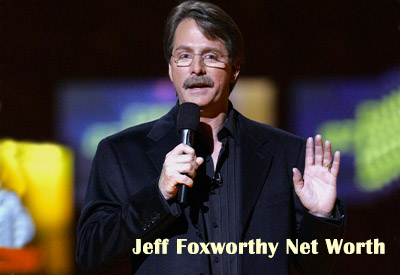 Jeffrey Marshall Foxworthy, this is his official name; he is from Atlanta and known as a television personality, comedian and an American actor. His comedian career started when his co-workers decided to sign him for a “laugh off,” which he ended up winning. He has been of tours with other actors. As of now, Jeff Foxworthy’s net worth estimated at $100 million.

Who is Jeff Foxworthy?

Born on 6th September 1958 in Atlanta, Georgia, he is the first born to Carol Linda and Jimmy Foxworthy.  He started his career at IBM where he worked for five years in maintenance; he entered the Great Southeastern “laugh off” in 1984 with the support of his friends and emerged the winner, and later decided to quit his job.

Jeff Foxworthy developed a unique style in comedy that eventually made Jeff the best comedian in the industry. In 1993, he released a comedy album, entitled “You Might Be a Redneck If… that was later ranked No. 38 on the Billboard 200 chart.

In 2001 and 1996, Jeff won the People Choice Awards and Personality of the Year respectively. He also hosted a weekly radio show, ‘The Foxworthy Countdown” from 1999 to 2009, it was aired for over ten years.

His comedy CD was released in 2004 and was No. 1 on the Billboard comedy charts and was sold all over the US. He created a TV series called “Blue Collar TV” that was on WB network, it aired from 2004 to 2006; and he later released three DVD movies.

Jeff Foxworthy is an accomplished comedian and with an impressive performance as a comedian, a radio host, a writer, and a television host. Jeff Foxworthy has a net worth of $100 million in assets and earnings.

Best highlights in Jeff Foxworthy’s career and wealth include:

His earnings and source of income listed below:

–    In 1999, his estimated earnings from the compilation of the Greatest Bits album were $500k as certified gold by RIAA.

–    Jeff’s music album “Crank It Up” gave estimated earnings of $1.05m 1996; as certified platinum by RIAA and gold by Music Canada

–    In 1995, revenues from the album Games Rednecks Play was $3.1m as certified 3x platinum by RIAA and also platinum by Music Canada. The same year he was entitled to have a salary of $32, 500 per episode of Jeff Foxworthy show.

–    His album “You Might Be a Redneck If…” had earnings of $3.1 million; it is certified 3x platinum by RIAA and platinum by Music Canada.

Jeff Foxworthy is considered one of the world’s wealthiest and the most successful stand-up comedians, with an estimated net worth of $100 million.

Comeidan Jeff Foxworthy lives in Georgia in his well-furnished house with his wife, Pamela Gregg and his two daughters; Jordan Foxworthy and Julianne Foxworthy.