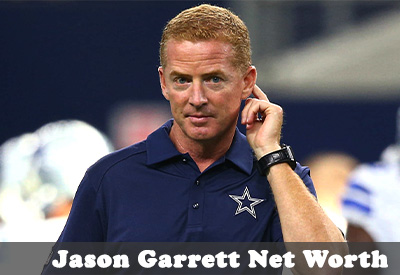 Former American quarterback football player Jason Garrett became the first ex-player of the Dallas Cowboys to become the head coach. On January 5th, 2011, Jason was named the eighth head coach in Dallas Cowboys. In the 1990s, during the seven-season as a Cowboys quarterback player, he was a part of the 1993 and 1995 Super Bowl-winning teams. As a QB, he played a total of 39 games.

Here, we’ll be exploring the details of Jason Garrett’s income that he makes from his career as a QB player and head coach. Let’s figure out Jason Garrett’s salary, net worth.

Who is Jason Garrett? His Career Info and Highlights

Jason Garrett (full name: Jason Calvin Garrett) was born on March 28, 1966, in Abington, Pennsylvania, which makes his age 54 year. While he was in high school, he played multi-games such as football, baseball, and basketball. During his senior year, Jason played football as a quarterback and safety and honored All-League for his performance.

Jason Garrett went on to Princeton University to play college football as a quarterback for the freshman team. He earned a bachelor’s degree in History in 1989. Also, he received the Asa S. Bushnell Cup as the Ivy League Player of the year.

After that, Garrett signed a contract with the New Orleans Saints in 1989 and eventually signed to the practice squad. Then he played for the San Antonio Riders and Ottawa Rough Riders. In 1993, Jason signed to Dallas Cowboys and played until 1999.

Moreover, in 2000, Garrett signed an agreement with the New York Giants, where he spent three seasons before heading to the Tampa Bay Buccaneers.

After retiring as a QB player, he became the quarterback coach for the Miami Dolphins under head coach Nick Saban in 2005. After two years, he was hired by Dallas Cowboys as an offensive coordinator and, consequently, promoted to head coach in 2010. Since then, he is serving as the head coach for Dallas Cowboys.

It’s no surprise that coach Jason Garnett is listed in the top highest-paid. He makes millions of worth through his deal as a coach and a quarterback player. In 2019 Jason Garrett’s salary is $5 million. Jason Garrett has summoned a net worth of $12 million, as of 2020.

Furthermore, in 2015, Garrett has an agreement of $30 million with Dallas for five years that pays him $6 million a year. Before being a head coach, in his 2008 season, Jason Garrett’s salary was $3 million; the highest salary for an assistant coach in the NFL.

Currently, Garrett lives in Dallas home, along with his family happily. In 2011, he listed for 1.95 million his Lindenwood home, which he bought in April of 2007 for $1.9 million. The 4,000 square-foot house features four bedrooms, four and a half bathrooms with three car rear garage. Moreover, it has a pool, separate breakfast room, pool, and four fireplaces.

Besides, he has a luxurious car collection in his home garage. Thus, he has not given the details of his cars to the media yet.