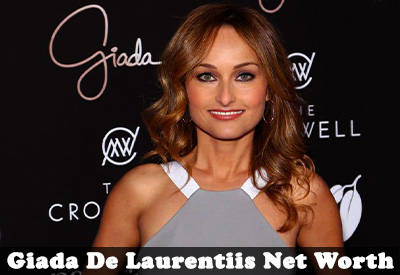 If you are a food lover, then you have watched plenty of cooking shows on various channels. Similarly, there are many stars on the Food Network that we have been watching for more than a decade; one of them is Giada De Laurentiis.

Gaida de Laurentiis is an Italian-American chef. Besides, Gaida has authored many cookbooks in which she has written about delicious Italian cuisines. Also, it’s not just the food; it’s all about stories, love, energy, and creativity. Gaida has proved herself. And now, Celebrity Chef Giada De Laurentiis is one of the renowned chef celebrities and earns millions of net worth and salary through her cooking shows and other ventures. Here everything you need to know about Gaida. Take a quick look!

Giada makes a colossal amount of money from her culinary and TV shows, Giada De Laurentiis is enjoying a net worth of $30 million. She also frequently appeared on NBC’s Today show for cooking-related skits.

Apart from that, she opened her restaurant named GIADA in Las Vegas, Nevada. Further, she is the author of nine New York Times best-selling cookbooks, including her most recent book titled ‘Gaida’s Italy.’

Other than that, she has launched the lifestyle and e-commerce platform, Giadzy.com in 2012. On the website, she posts blogs like new recipes, travel tips, and a range of kitchen products.

In her show, Giada De Laurentiis’s ex-husband, Todd Thompson also made his appearance. The couple ended their marriage after 11 years, and it was expensive. The couple has a daughter, Jade born in 2008. According to TMZ, Gaida ordered to pay Todd $9000 a month in child support. Also, she gave him $3.2 million houses in Pacific Palisades and $300,000 in art and furnishings.

On the other hand, Giada was ordered to give Todd 50% of the unpaid advances to cookbooks which aren’t published yet. Giada De Laurentiis had paid a massive amount to Todd for their divorce. Further, the two shared joint custody of their ten years old daughter.

Who is Giada De Laurentiis? Her Career Info.

From her stunning looks to a flawless complexion, it is hard to believe that Gaida De Laurentiis is a chef. When we first look at her picture, we think she is a model and actress, but not, she is beyond that. Born in Rome, Italy, on August 22nd, 1970, Gaida’s birth name is Giada Pamela De Benedetti. She was born to the actor’s parents, and after the divorce of guardians, along with her siblings, she moved to South California.

Giada De Laurentiis earned a social anthropology degree from UCLA in 1996 and then went to Paris’ Le Cordon Bleu. After that, she returned to LA and started working at prestigious restaurants; Ritz Carlton Fine Dining Room and Wolfgang Puck’s Spago. Later, she started working as a food stylist and also, wrote an article about her family’s Sunday Meal Tradition. Food Network saw the article and immediately contacts her.

After that, Giada De Laurentiis signed a deal with Food Network and hosted a cooking show ‘Everyday Italian.’ She has spent ten years of her life working in the television and hosted many cooking shows including Gaida at Home, Behind the Bash, Giada’s Weekend Getaways and more.

Moreover, De Laurentiis lent his voice in the US version of the Tinker Bell Special ‘Pixie Hollow Bake Off’ as Gelata back in 2014.

Giada makes lots of money through her culinary and from her appearance on the television. She has spent some portion of her income on real estate and cars. After her divorced from Todd, Giada De Laurentiis purchased a $6.9 million beautiful home in Pacific Palisades in March 2016.

Again, De Laurentiis bought her second home for $4.86 million in 2019. She has already built herself an impressive gold nest and living a luxurious lifestyle. She drives a vintage Bulgari car.