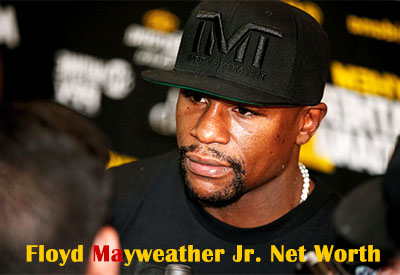 Floyd Mayweather Jr is an American professional boxing champion. Due to his prowess in the boxing ring, Floyd is considered by many as one of the best pound-for-pound fighters in the history of the popular sport.

Floyd Mayweather Jr. was born on February 24, 1977, In Grand Rapids, Michigan. Mayweather was born into a family of boxers. His dad, Floyd Mayweather Sr. was a former contender in the lightweight category, while his uncles Roger and Jeff Mayweather, were professional boxers.

Unfortunately for young Mayweather, his mother was a drug addict. Despite his father’s efforts in the boxing ring, the family was in extreme poverty. Now due to a successful career, he is very rich. Know Floyd Mayweather’s net worth in this article.

Due to his father getting convicted of illegal drug trafficking, Floyd spent most of his childhood under the care of his grandmother. As a result of his difficult upbringing, Mayweather turned to the box as an outlet for his frustrations and pent-up anger. In no time, he soaked up the skills that would help in his ascent to the top of the boxing profession.

Mayweather briefly attended Ottawa High School, before deciding to drop out and focus on a career in boxing.

Due to his highly tuned skills, Mayweather’s amateur boxing career was a walk in the park. He won the national Golden Gloves in 1993, 1994, and 1996. Incredibly, Floyd’s amateur record stood at 84-8.

In 1996, the boxer took part in the Atlanta Olympics and bagged a bronze medal in the featherweight category. In the same year, his career took a step forward; as he participated in his first professional bout, earning a comfortable win against Roberto Apodaca. Up until 1998, Floyd Mayweather’s continued racking up win after win.

After his 14th professional win, his father, Floyd Mayweather senior, came straight from his prison sentence and became his trainer. Under his father, the younger Floyd’s boxing skills improved tremendously.

In 1998, with just two years under his belt as a professional boxer, Floyd won his first world title, the WBC Super Featherweight Championship, defeating the then World number 1 in the category, Genaro Hernandez.

One of Floyd Mayweather’s memorable fights was against former IBF super-featherweight champion, Diego Corrales. What made the fight so interesting was that until then, the two fighters had unbeaten records.

Despite being technically inferior to his opponent, Mayweather’s agility and speed helped him to defeat his opponent in every round knocking him off five consecutive times. The fight helped the American fighter to claim boxing’s mythical pound-for-pound title.

But all things must come to an end. On May 26, 2001, Mayweather suffered the first knockdown of his career in the sixth round, in a bout against Carlos Hernandez. Despite the unfortunate knockdown, the American still won the fight in the 12th round.

His last fight in the super featherweight division was against Jesus Chavez, who came into the showdown with a 31-fight winning skill. Mayweather defeated him, defending his title in the process.

Floyd then moved to the lightweight category. His first fight was against WBC champion Jose Luis Castillo. Despite this being his debut fight in the division, Mayweather surprised everyone by knocking off the WBC champion in the 12-round fight.

In 2004, Floyd Mayweather made his debut in the 140-pound category in the light welterweight division. Not surprisingly, he defeated his opponent, DeMarcus ‘Chop Chop’ Corley.

In 2005, he faced Henry Brussels in another WBC elimination fight. In typical fashion, Mayweather outclassed Brussels in seven rounds. The victory made Mayweather the mandatory challenger for the WBC light welterweight championship, held by Arturo Gatti.

On June 25, 2005, the two fighters faced off in Atlantic City. Gatti’s fans had come expecting their favorite to win, but Mayweather completely dominated the fight with his trademark high speed and fast punches.

His record currently stands at 50-0

According to sources, the boxer, who has never lost a professional fight, easily earns $150 million to $300 million when he is fighting. It is said that between June 2014 and June 2005, Floyd bagged an astonishing $300 million.

He earned a reported $250 million from his May 2015 fight against Manny Pacquiao. Also, his August 2017 fight against Conor McGregor added a further $300 million to his net worth.

Floyd Mayweather’s net worth is $600 Million.

Floyd Mayweather has two fleets of cars. The collection includes a Bentley worth $290,000. All the cars at his Miami mansion are white, while those at his Vegas residence are black.

The multimillionaire boxer wears shoes once. Once Floyd is done with them, he leaves them in hotel rooms for the staff.

Besides, Floyd is the proud owner of a G5 private plane. Floyd Mayweather who has $600 Million net worth, lives a lavish lifestyle.