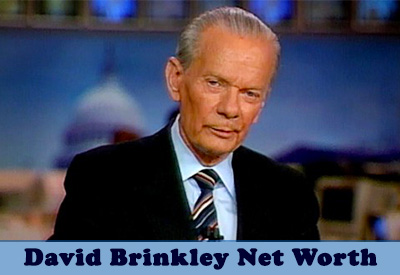 American television has seen some influential news reporters in its time. David Brinkley was one of the most respected veterans and personalities in the news today. He had an authentic style of writing and unique delivery that made him popular with the broad audience. Even though he is not among us, his legacy still lives on. In this review, we will examine David Brinkley’s net worth and property details. So buckle up and take a trip down memory lane.

Who is David Brinkley? Work Highlight.

David Brinkley’s full name is David McClure Brinkley. He was born on July 10, 1920, in Wilmington, N.C. He was an American news reporter who was best-known for hosting and anchoring numerous news segments.

David was a TV newscaster for 50 years. As such, he groomed some of America’s most famous and beloved news personalities. Amid his flourishing career, he has received several awards: Ten Emmy Awards and the Presidential Medal of Freedom, just to name a few.

Initially, David served in the U.S. Army for two years before functioning as a Journalist for a local newspaper. In the early 1950s after NBC expanded from radio to television, David Brinkley was amongst the first people to be hired as television reporters.

When Brinkley joined reporter Chet Huntley to cover the presidential convention in 1956, the duo was so great that they eventually landed an evening news braodcast called “The Huntley-Brinkley Report”.

The two had great chemistry and displayed innovative working skills that helped them win consecutive Emmy Awards. Between 1961 to 1963, Brinkley additionally created a series of documentaries.

David Brinkley continued by hosting and commentating on NBC’s nightly news program during the ’70s. In the year 1980, he introduced a show called “NBC Magazine with David Brinkley.” Unfortunately, it was not able to compete with the popular CBS program, 60 minutes.

In the year 1981, he shifted to ABC (American Broadcasting Company) to host “This Week with David Brinkley” which was a Sunday program. The show featured Brinkley with a hosting panel of other respected journalists who performed interviews and presented an analysis of the week’s political events.

Till 1996, David Brinkley was a significant contributor to the show and served as a weekly commentator until he retired in the year 1997. In 1992, he received the Presidential Medal of Freedom from then-President George H.W. Bush.

At the time of David Brinkley’s death, he had a net worth of about $2 million.

Speaking about David’s life, he has been married twice. The name of his first wife is Ann Fischer (October 11, 1946- 1968) and they were blessed with three children. These are Alan Brinkley, Joel Brinkley, and John Brinkley.

He married his second wife, Susan Adolph on June 10, 1972. This union gave him a stepdaughter named Alexis Brinkley.

There’s no news regarding his house or what vehicles he drove. Being one of the most influential reporters in America, they must have been fancy. Furthermore, additional information concerning his home and car will be updated soon.

David Brinkley was one of the most influential and popular American news reporters of the early ’50s whose legacy still charms the vast audience of the world. Here, we will discuss details on his net worth, career, married life, and children.  He passed away on June 11th, 2003, in Houston, Texas.