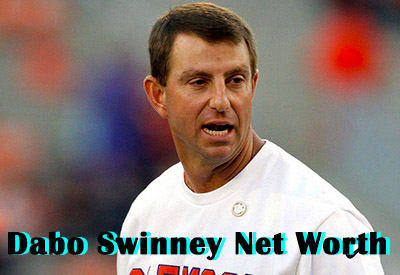 Dabo Swinney is among the best college football coaches in the NFL. As a student, Dabo played for the Alabama University’s Crimson Tide football in the ’90s. Now, Dabo is the head coach of Clemson University. Throughout his career, Swinney won a two-time national Championship in 2016 and 2018, respectively. This article explains Dabo Swinney’s Salary and net worth in 2019.

Let’s take a look, how Swinney makes his worth from his football career, including his source of income, occupation, house, cars, and much more.

Dabo Swinney is the highest-paid football coach in the history of college athletics. As of 2019, Dabo Swinney’s net worth is $20 million. Moreover, Dabo Swinney earns an average salary of $6.75 million through 2024.

In 2019, Dabo inked a new 10-year worth $93 million contract extension through 2028 that makes him the highest-paid coach in the NCAA. He will get an annual payment of $9.3 million that includes an insurance policy, retention bonuses, and compensations.

Since October 2017, Dabo is residing along with his family in Clemson. The 15,000 square foot along with a theatre. The coach and his family moved into the beautiful mansion two years ago.

It has spacious living rooms, master suites, a dozen rooms, an outdoor pool, a gym room, and theatre room. Further, he drives expensive cars across Alabama. While signing a contract with Clemson; it included two complimentary cars and six season tickets ti Clemson baseball and basketball games in the earlier year.

Dabo Swinney's contract at Clemson comes with a long list of perks including the use of two complimentary cars and six season tickets to Clemson baseball and basketball games.

Then there are benefits that aren't listed on his contract.https://t.co/GIWI6KfaOB

Born on November 20, 1969, and raised in Pelham, Alabama, Dabo Swinney’s real name is William Christopher Swinney. Dabo graduated from the University of Alabama in 1993, where he began to play as a wide receiver from 1990 to 1992. Additionally, he earned a Master’s Degree in Business Administration in 1995.

As he was pursuing his master’s degree, Swinney was an assistant coach for the Tide for two years. After being fired, Dabo worked for AIG Baker Real Estate in his hometown until 2003. After that, in 2003, Swinney was hired by Clemson Tigers as an assistant head coach and wide receiver coach for five-year. Eventually, he promoted to the team’s head coach in 2008.

In the following years, Dabo lead his team to the first championship of the ACC Atlantic Division in 2011 and also, awarded Bobby Dodd Coach of the year that same year. Further, in 2013, Swinney signed an eight-year contract with Clemson Tigers worth $27.15 million.

Other than that, Dabo is married to his lovely wife, Kathleen Bassett, since 1994 and shared three sons.