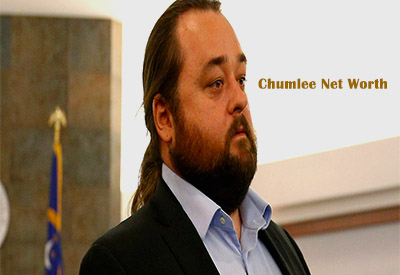 Chumlee was born Austin Lee Russell in Henderson, Nevada United States on 8th September 1982. His father died of pancreatic cancer at the age of 54; there is less information about his family. He was nicknamed “Chumlee” when he was 12 years; this is because of his broad face and chin.

His childhood friend is Corey Harrison “Big Hoss,” he is a son to Rick Harrison and his grandfather was Richard Benjamin Harrison; and they opened the shop in 1989. Chumlee’s net worth revealed later in the article.

He loves collecting shoes; he owns more than 200 pairs of shoes. Chumlee also loves sports, video games and skateboarding; a fan of both punk rock and rap music and TV series Boardwalk Empire, Sons of Anarchy and Breaking Bad. Chumlee enjoys driving his 1986 Buick Regal around; customized with hydraulic lifts on the back and front.

He decided to change his lifestyle in September 2013; he lost close to 34 kg in a year. Chumlee hit the gym six days a week and improving his diet. He started more juice, eating more vegetables, and abstaining from red meat.

This life change enabled him to ride on his hovercraft that he bought earlier in the series, and could not ride due to the maximum weight restriction of 110 kg. There were rumors that Chumlee was dead back in 2013, several websites reported his death; and stated the cause was from a marijuana overdose, but all that was false news.

Chumlee’s earnings are from him working at the Gold and Silver shop, he also has a candy shop, owns a T-shirt company and has acted in some television series; his net worth is at $5 million.

Chumlee is an American actor, businessman and reality television personality, he works at the gold and silver pawn shop, and he gained his popularity and stardom when he appeared on the History Channel television “Pawn Stars.”

He has been friends with Rick Harrison for a very long time, who introduced him to the Gold and Silver Pawnshop in Las Vegas to work at the counter; his salary was $25k per episode and Chumlee’s net worth reached $5 million.

He started working at the Gold & Silver shop at the age of 21, where he worked for five years before filming the first season of the reality television series “Pawn Stars” in July 2009. His roles were mainly behind-the-counter duties like testing items, loading items, and writing tickets for items purchased by customers.

Chumlee formed his own company, selling novelty items; including T-shirts of his design, his sales of the merchandise surpassed the other stars on the show; and this is because of his popularity.

Chumlee appeared alongside Rick and Corey Harrison, in “iLost My Head in Vegas” an American TV series iCarly. He opened a candy shop in May 2017, Chumlee’s Candy on the Boulevard; situated across the street from the Gold and Silver Pawn Shop in Las Vegas.

Chumlee owns a Rolls-Royce Phantom, a Maserati GranTurismo, a Cadillac Escalade, Range Rover and a 1964 Impala SS. Chumlee is reported to have put his house for sale, and he has reduced the price for the third time. He bought the house at $1.1 million in 2012. Initially listed at $1.85 million, and the current price is 1.58 million.