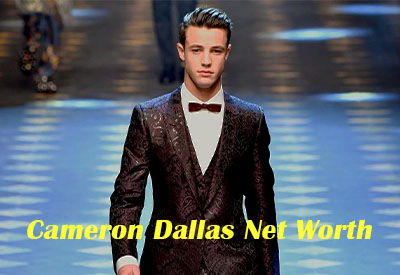 The internet has built big names that have been mainly born in the ‘90s. This is a phenomenon that is yet to be understood by the older generations. But yes, it is happening. Cameron Dallas is such a person who has built a large net worth from social media platforms like Vine, Instagram, and YouTube. Know Youtuber Cameron Dallas’ Net Worth in 2021.

Who is Cameron Dallas? His career info

Cameron Dallas is a famous American actor, Instagram Personality, and YouTube star, building him an astonishing net worth. Cameron was born as Cameron Alexander Dallas, on the 8th of September in 1994 in Whittier, California. This makes him 26 years of age. Cameron was raised together with his older sister, Sierra Dallas by their single mother, Gina Dallas. He is American by nationality with Mexican, German and Scottish heritage

Cameron Dallas started his career by posting Vine videos that featured his pranks and jokes with his family members and close friends. As of 2021, he has grown his following of 21.2 million on Instagram, 16.1 million on Twitter and 5.6 million on YouTube.

His social media prowess has grown his acting career that is evidently noticeable in his videos. His meeting with Brian Robbins opened his acting door at Awesomeness TV, landing him a role in the film ‘Expelled’ in 2014.

Cameron Dallas has also starred in the movie, ‘The outfield’ as Frankie Payton together with other stars Joey Bragg and Nash Grier in 2015.  He has also featured in several episodes of ‘American Odyssey,’ an NBC TV show. Cameron also acted on ‘Neighbors 2: Sorority Rising’. The most unfortunate thing is all of Cameron’s parts were not included in the final movie. Cameron is not the type that gives up as he has his reality show on Netflix called, ‘Chasing Cameron.’ He has also released songs such as ‘She Bad.’

How rich is Cameron Dallas? He has managed to transform his career into wealth within a short period of time. His continuously increasing following is an attractive ground for such social media platforms like Instagram, Twitter, Facebook, and Google to reap advertising money.

He, in turn, gets a share of this money due to his high numbers of followers viewing these advertisements. So how wealthy is he? Authoritative sources estimate that Cameron Dallas has a net worth of $4.5 million. Much of this wealth comes from his internet earnings. He is estimated to make, on average $500 per day from his YouTube ad views, making it $185,500 per year. He has promoted brands like XOut on his Instagram page.

He is not only a social media earner, but he also gets good earnings from his acting career. He starred on the film ‘Expelled’ which earned $8 million at the box office and got the number one position on iTunes downloads. He also runs his show on Netflix, earning him a good cheque.

As if that is not enough, Cameron has signed modeling deals with such brands as Dolce & Gabbana (D&G), Penshoppe, the American apparel, and several other fashion brands. He has been named the fresh male face for Calvin Klein (CK), making him high earnings.

Cameron has lived with his mother in California but later moved to Los Angeles along 1600 Vine St, Los Angeles, CA 90028, where he rents a luxurious apartment with his friend, Aaron Carpenter. He has severally posted photos next to prestigious cars whose brand names are not known.