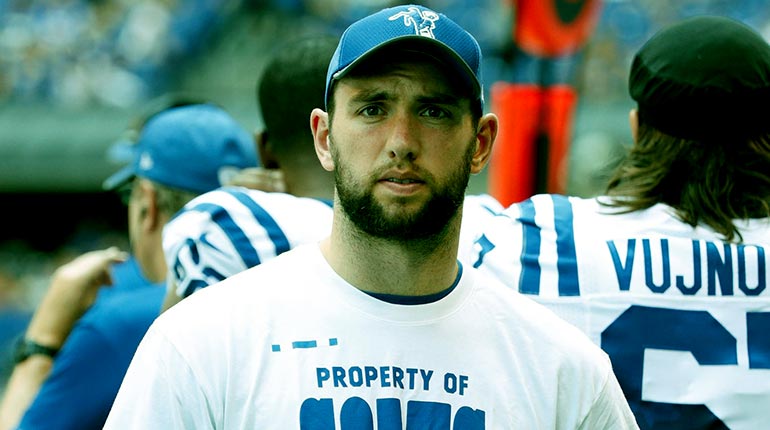 Andrew Luck is a famous former American football quarterback who is widely known for playing for Indianapolis Colts of National Football League for his entire career. He was the runner-up of Heisman Trophy in 2010 and 2011. He even was named the Offensive Player of the Year in Pac-12 Conference for both the year.

Signing millionaire worth deals with Colts has skyrocketed his net worth. So, what is his exact figure of net worth? What are his sources of income besides playing career? What about his contracts?

Andrew has built amazing statistics, set major records, and even earned several honors. But most importantly, he made huge fame and worth. He has signed deals in double-digit millionaire worth.

As of 2020, Andrew Luck’s net worth is reported to be around $40 million, whereas his annual salary if $9 million.

Now, sources have confirmed that he made $100 million just over the first six seasons of his professional career. Back in 2016, he signed a contract with Colts for the worth of $140 million. During the time, he was the wealthiest NFL contract in history.

Since then, Andrew has been collecting a hefty amount of money. He even became the highest earner on the Colts’ rollercoaster. In 2018, he made $24.4 million, nearly double the salary of the second-highest-paid player, T.Y. Hilton. In 2018, he made $13 million.

How Much Would He Earn If He Didn’t Retire?

Colts’ owner Jim Irsay once mentioned that he would have collected $500 million through his career.

Regarding his contracts and deals, he signed a four years contract in 2012 that worth $22 million. In 2016, the deal hiked to $16.5 million. In the same year, he signed the contract extension for $140 million, with $87 million guaranteed.

Well, his contracts, deals, and playing career are not the only sources of income. He earned $50 million solely from endorsements and merchandise sales. In 2019, he collected $2.8 million only from endorsements deals’ earnings. He has endorsed high-profile brands like Nike, Gatorade, DIRECTV, EA Sports, Panini, and Klipsch.

In 2013, Andrew surprised everyone parting his business with Gatorade to sign with BodyArmor for an equity stake in the company. He is not only an endorser but also an investor and partner.

Andrew was only 29 years old when he retired. He retired on 24th August 2019, after playing for seven seasons. During a press conference, Andrew mentioned that his recurrent injuries and rehabilitation as the main reason behind the retirement.

In the press conference, Andrew said that he had been stuck in the process and was not able to live the life he always wanted to. He also mentioned the decision as to the hardest one but think it is the best one for him.

As he retired in 2019, many people considered him to be the best professional athlete to end the career during their prime.