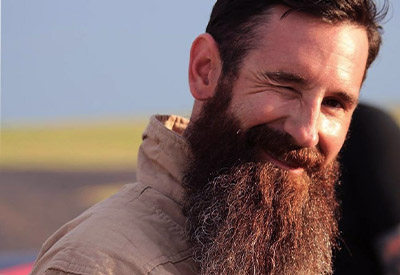 Aaron Kaufman is an actor and a self-taught mechanic. He is the owner of Arclight Fabrication. The enterprise does supplies for the Ford F-100 pickup.

Prior to starting his own business, Aaron Kaufman worked as a lead mechanic for Gas Monkey Garage. Gas Monkey Garage was used to produce the reality show ‘Fast N Loud‘ on the Discovery channel from 2012 to 2018.

Aaron Kaufman gained so much popularity from the show due to his prowess in repairing cars. He now has his own show ‘Shifting gears with Aaron Kaufman.’ The show premiered in 2018 on the discovery channel. In the show, he talks about his business ventures. Learn about Aaron Kaufman’s net worth of 2021 and career.

As of 2021, Aaron Kaufman is estimated to bear a net worth of $6 million. He brings in $50,000 per episode of Shifting Gears with Aaron Kaufman. Aaron also brings in a handsome amount from selling hats, T-shirts, and F-100 parts.

Aaron was born on January 26, 1982, in Crowley, Texas. His dad was a mechanic. That said, Aaron Kaufman grew up watching his dad work on cars. Since childhood, he always had a passion for rebuilding items. He schooled at Crowley High School.

As he grew older, he developed a severe passion for working with cars and rebuild faulty cars. From there, he began teaching himself mechanics and fabrication.

Later on, he began working at a local garage. While working there, Aaron Kaufman luckily met Richard Rawlings, his ex-business partner. Richard Rawlings is a mechanic and businessman.

Not long after the incident, Richard Rawlings requested Aaron Kaufman to start up a project with him. The two started the Gas Monkey Garage. The garage was used to produce the TV show ‘Fast N Loud, ‘ which hit the screens in 2012.

The reality show mainly showed the activities of Richard Rawlings and Aaron Kaufman as they rebuild worn-out cars to earn a profit. Aaron Kaufman stepped out of the show in 2018 to start his own shop, Arclight Fabrication.

His decision to exit the show was based on his desire for independence, away from the strict deadlines and workload at Gas Monkey Garage. Aaron Kaufman parted ways with his business partner Richard Rawlings without any bad blood between them.

He now has his own show ‘Shifting Gears With Aaron Kaufman’ on the discovery channel. On the show, Aaron talks about his business ventures.